Inside the Collection: Cornstalk Fence Section

This month’s Inside the Collection post is a little different – instead of featuring an artist from our Permanent Collection, this month we’re highlighting a historic piece currently installed in our Sculpture Garden: the cast iron Cornstalk Fence Section made by Wood & Perot Ironworks. This fence section was donated to the Museum in 1981 by the Gulf Coast Chapter of the National Ornamental and Miscellaneous Metals Association (NOMMA). It was made in the late 1850’s and features a repeating, central cornstalk pattern and fence posts with pumpkin bases, tree trunks, and morning glory vines. It is painted in vivid colors and is typical of the 19th century Picturesque style, the architectural manifestation of American romanticism, which stressed spontaneity and emotion over control and reason. Unfortunately, we have no further provenance for this unique piece, but we assume it came from a house in the New Orleans area. What we do know is that it is not the only example of a Wood & Perot cornstalk fence, but it is now very rare.

Photo courtesy of the Free Library of Philadelphia.

Robert Wood originally established his foundry in Philadelphia in 1839, and by 1853, “Robert Wood, Iron Rail Foundry and Manufacturing” employed over 200 workers. He combined forces with Elliston Perot in 1857, becoming “Wood & Perot Ornamental Iron Works.” The demand for ornamental ironwork in New Orleans was so high that in the late 1850’s, the company established another branch: Wood, Miltenberger & Co. at 57 Camp Street. Wood, Miltenberger, & Co. made many of New Orleans' most famous works of cast iron, including fences, balconies, and elements of graves. Both branches of the company continued to produce ornamental ironwork until the company went bankrupt and closed in 1878. It was likely that the Metal Museum’s fence section was made at Wood, Miltenberger, & Co.

Parts of this pattern are also present at:

(Photos courtesy of the Cornstalk Hotel and the Library of Congress.)

The house at 915 Royal Street was built in 1816 for Francois Xavier Martin, chief justice of the Louisiana Supreme Court, first Attorney General of Louisiana, and author of the first history of Louisiana. A native of Marseilles, France, he lived in the house from 1816 to 1826. Dr. Joseph Secondo Biamenti bought the home in 1834 and erected its cornstalk fence in 1856 for his wife, who was homesick for the open fields of her native Iowa. Dr. Biamenti commissioned the cast iron fence from Wood & Perot in Philadelphia, who created a pattern of it that later appeared in their 1858 catalog. This house is now the Cornstalk Hotel, which has hosted such auspicious guests as Harriet Beecher Stowe and Elvis Presley.

This past march, Metal Museum Members Richard and Eileen Garson mailed us these vintage postcards featuring the Cornstalk Hotel’s fence. What a great find!

(Photos and video courtesy of the Architectural Digest, Hill Riddle, Jr. & Associates, and the Library of Congress.)

The second most well-known cornstalk fence is at the Short-Favrot House (also known as Colonel Short’s Villa or the Cornstalk Mansion). It was built in 1859-1860 by Colonel Short and has six bedrooms, three full and two half baths, and four balconies. The house was designed by architect Henry Howard, and its cornstalk fence was created by Wood, Miltenberger, & Co. Although now painted black, the fence was originally as brightly-colored as the Metal Museum’s fence section. Some sources claim that Colonel Short commissioned the fence for his own homesick, Iowan wife, but this story likely comes from the commission for 915 Royal Street. It is likely that Colonel Short picked out the cornstalk fence from the 1858 Wood & Perot catalog. The corn theme of the Short-Favrot House continues on the interior with a reproduction, Brunswig & Fils-patterned wallpaper (first printed in 1820-1830) that features vertical ears of corn and swans. If you’re looking for your own little piece of cornstalk fence history, the Short-Favrot House is currently on the market for $4.3 million. 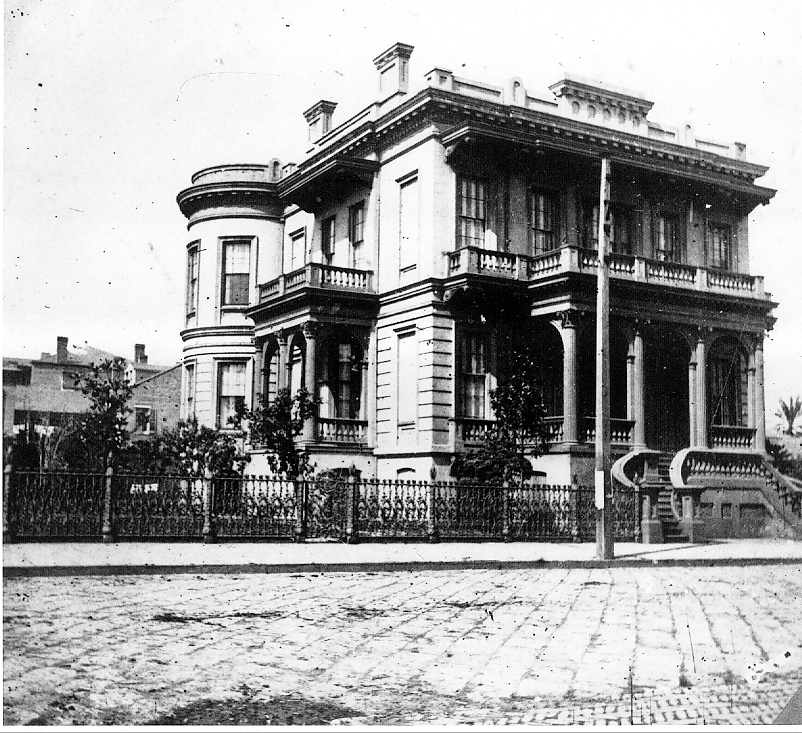 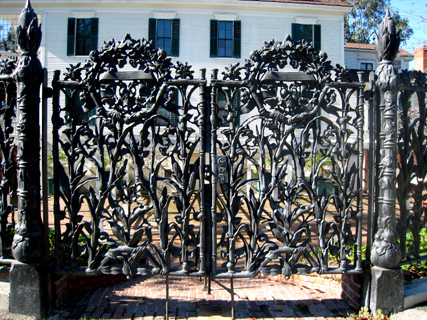 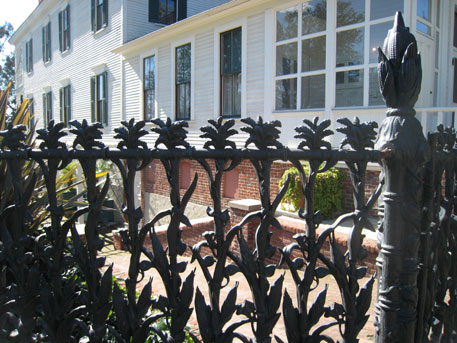 (Photos courtesy of the Banning Museum and Allard Real Estate.)

While most sources on the Wood & Perot cornstalk fences mention these two New Orleans homes, there is another example of this fence currently located at the Banning Museum in Wilmington, CA. Phineas Banning, known as the “the Father of the Port of Los Angeles,” built this 23-room residence in 1864. His descendants lived in the mansion until 1925, and later the residence, stagecoach barn, and the surrounding 20 acres of parkland were acquired by the City of Los Angeles and turned into a museum. The cornstalk fence was not donated to the Banning Museum until 1982.

The Banning Museum’s cornstalk fence features 11 panels and 2 double gates. They were rescued by William Sanford Banning, Phineas’s son, in 1910 while on a trip to New Orleans. This fence was originally installed in a two-story, Italianate home on the corner of Julia and St. Charles Street, and by the time William saw it, the house was completely demolished with only the fence remaining. After purchasing the fence, William had it shipped to California and installed it in his home at 31st and Hoover Street in Willimington. William’s family stayed in this home until it was razed in 1932. The fence was then cut up and stored in Pasadena by the Banning family until it was donated to the Banning Museum. According to conservators, the Banning Museum’s cornstalk fence was always painted black.

The Dufour Plassan House (1206 North White Street) was originally built in 1870 on Esplanade Avenue for the attorney Cyprien Dufour. The house was moved to its current location in 1906 and purchased by Adolph Plassan. The Dufour Plassan House only has the pumpkin and cornstalk fence posts from the Wood & Perot’s 1858 pattern, but the house also features fence posts with sunflowers, ears of corn, and cornucopias that were also made by Wood, Miltenberger, & Co. The house’s front stained-glass windows also feature cornstalks. 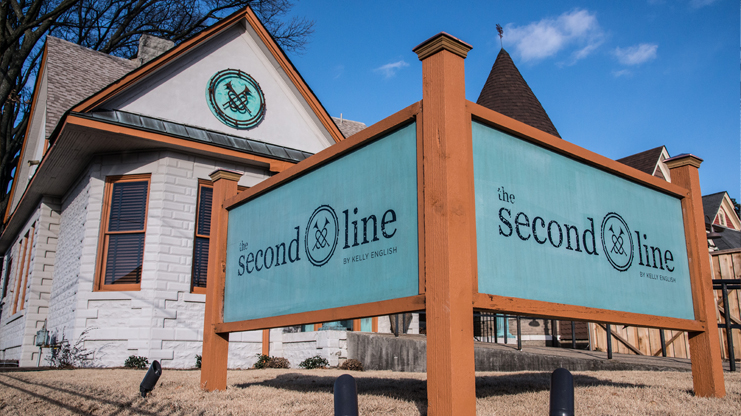 Finally, if you’re a Memphis local, check out Second Line, Kelly English’s restaurant featuring everyday, New Orleans-inspired cuisine in Overton Square. In the main dining area, behind the brick fireplace, hangs a middle section of the cornstalk fence. You can even eat at a table right under it!

Hope you come down to the Metal Museum and see our Cornstalk Fence Section. And if you see any other sections of this fence while on your travels, send us an email!

Special thanks to Michael Sanborn, Director of the Banning Museum for providing material for this blog.

Inside the Collection: J.G. Braun Company

My Experience as the Metal Museum's 2020 Arts Intern